Our new book is titled Divided We Stand: The 2020 Elections and American Politics.  Among other things, it discusses state and congressional elections.

At Presidential Studies Quarterly, Gary Jacobson has an article titled "Driven to Extremes: Donald Trump’s Extraordinary Impact on the 2020 Elections." The abstract:

Reactions to the divisive person and presidency of Donald Trump dominated voting decisions in the 2020 elections, which consequently set new records for electoral continuity, party loyalty, nationalization, polarization, and presidential influence on the down-ballot vote choices, to the point where local factors such as incumbency, candidate quality, and campaign spending barely registered in the congressional election results. Evaluations of Trump’s leadership in the national crises besetting the United States in 2020 were assimilated almost entirely into existing attitudes toward the president, limiting the impact of these events. The Democrats achieved unified control of the government, but by the narrowest of margins, and the political configuration that had emerged from Trump’s election in 2016 remained largely intact. Republicans’ responses to Trump’s seditious efforts to nullify Biden’s victory promise to extend his influence through the 2022 elections and beyond. 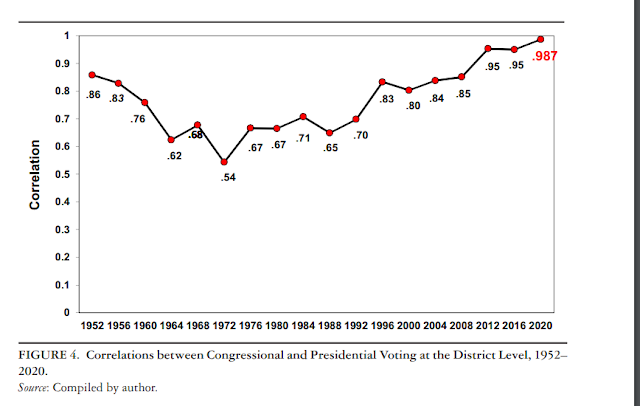