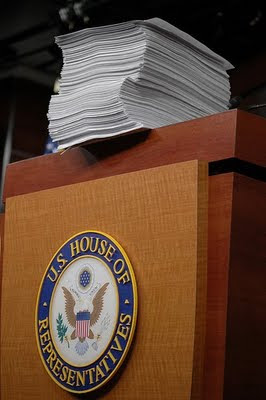 (Photo by Jesse Blumenthal)
From The Politico:

It runs more pages than War and Peace, has nearly five times as many words as the Torah, and its tables of contents alone run far longer than this story. The House health care bill unveiled Thursday clocks in at 1,990 pages and about 400,000 words. With an estimated 10-year cost of $894 billion, that comes out to about $2.24 million per word.

In California's Inland Empire, Organizing for America -- a DNC grassroots group that is the successor to the Obama campaign --is working for the president's health proposals:

Cal State San Bernardino student Torrey Reed was only too happy to oblige when an Obama organizer stopped him on a campus walkway last week and asked him to immediately open his cell phone and tell his senator he supported health care reform.The organizer gave him the number and told him what to expect from the staffer who answered. "It's the first time I've felt like I really had an impact on something," said Reed, 21, of Moreno Valley.

Similar, brief interactions occurred a few hundred thousand times last week as an army of volunteers fanned out across the country to drum up support for President Barack Obama's top political priority.

"I know organizers everywhere are going through the same type of stuff," said Tommy Purvis, 30, San Bernardino County's main organizer for Organizing For America, a national volunteer group advocating for health care reform and other parts of Obama's agenda.

Last week, the OFA orchestrated a national "day of action," visiting college, public parks and even ferry boats to get Obama supporters to call Congress and say they support health care reform. It's that kind of push that the OFA hopes will keep Obama's agenda on track.

A big problem, however, is that there is no single bill to rally around. Moreover, reports The New Republic:

Obama's people had created something both entirely new and entirely old: an Internet version of the top-down political machines built by Richard Daley in Chicago or Boss Tweed in New York. The difference (other than technology) was that this new machine would rely on ideological loyalty, not patronage. And that was a big difference. The old machines survived as top-down organizations because they gave people on the bottom something tangible in return for their participation. By contrast, successful organizations built mainly on shared philosophy tend to be driven by their memberships. Marshall Ganz, the legendary United Farm Workers organizer-turned-Harvard-professor and godfather of the Obama field strategy--he helped orchestrate Camp Obama, a grassroots training program for staff and volunteers--sees the command-and-control nature of OFA as a crucial flaw. "It's much more an instrument of mobilizing the bottom to serve the top than organizing the bottom to participate in shaping the direction of the top," he told me.

This past week, NBC aired Savannah Guthrie's interview with the president. The White House website does not include a transcript, and only partial transcripts are available on non-subscription sites:

Democracy Corps recently did a focus groups of Atlanta-area Republicans aged 45-60. The group issued a report that got a modicum of attention during a slow-news weekend. Authors
Stanley B. Greenberg, James Carville, Karl Agne, and Jim Gerstein reach these conclusions:

[T]hese voters identify themselves as part of a ‘mocked’ minority with a set of shared beliefs and knowledge, and commitment to oppose Obama that sets them apart from the majority in the country. They believe Obama is ruthlessly advancing a ‘secret agenda’ to bankrupt the United States and dramatically expand government control to an extent nothing short of socialism. While these voters are disdainful of a Republican Party they view to have failed in its mission, they overwhelmingly view a successful Obama presidency as the destruction of this country’s founding principles and are committed to seeing the president fail.

To their credit, Greenberg and company do not resort to the tired charge that conservatives are racist. On the contrary, they write: "[W]e allowed for extended open-ended discussion on Obama (including visuals of him The Very Separate World speaking) among voters – older, non-college, white, and conservative – who were most race conscious and score highest on scales measuring racial prejudice. Race was barely raised, certainly not what was bothering them about President Obama."
In general, though, the report's tone is critical. It suggests that "mocked minority" belief is evidence that the Republicans are out of touch. Perhaps the authors are the ones out of touch. Evidently, they don't watch The Daily Show or The Colbert Report.
The focus group members worry about the abrupt growth of government. While other Americans might not use words such as "socialist," they are also concerned. Says Gallup: "New Gallup data show that 57% of Americans say the government is trying to do too many things that should be left to businesses and individuals, and 45% say there is too much government regulation of business. Both reflect the highest such readings in more than a decade."
The authors are probably correct, however, that Republican base voters differ from independents in certain ways. But so what? So do Democratic base voters. According to one poll, 35 percent of Democrats believe in the core idea of "truther" conspiracy theory, the idea that President Bush had advance knowledge of the 9/11 attacks. The authors say that GOP base voters "are actively rooting for Obama to fail as president," though they do not quote any focus group members actually saying that. The "they want him to fail" charge seems to be another way of saying that they disagree with the president's policies. Are such sentiments really that outrageous? Base Democrats would have said the same thing about President Bush. Indeed, one of them was Carville himself, who said "I certainly hope he doesn't succeed."
So what we have here is a finding that base voters are base voters. Tune in next week, when we learn that Yankees fans tend to root for Bronx-based teams.

On September 15, this blog noted a couple of likely reasons for Bill Clinton's endorsement of Gavin Newsom in the California Democratic gubernatorial primary. First, Newsom foe Jerry Brown had harshly attacked the Clintons in the 1992 presidential primaries. Second, Newsom had endorsed Hillary Clinton in the 2008 primaries (perhaps payback for a perceived snub by Obama). Now Sherry Jeffe adds:

The Clinton-Brown grudge isn’t the only feud in play. Just days before Clinton came to California, DreamWorks founders and Hollywood powerhouses Steven Spielberg, Jeffrey Katzenberg and David Geffen endorsed Brown for governor and announced plans to host a mega-fundraiser for him.

Why? As Andy Spahn, their political consultant, told Variety, the three believe that Brown “is the best-qualified candidate to fix the mess in Sacramento.” They also contributed to Brown’s attorney general campaign fund.

Yes, but... could the trio’s endorsement have something to do with the rift between Geffen and the Clintons, which widened when Geffen hosted a fundraiser for Obama in late 2007? Those certainly weren’t healing words that New York Times columnist Maureen Dowd quoted Geffen as saying: “Everybody in politics lies, but [the Clintons] do it with such ease, it’s troubling.”

Rasmussen reports the preferences of likely GOP primary voters for their party's 2012 nomination:

Obviously, one campaign sets the table for the next. The top three were all players in 2008. Rasumssen also notes that Huckabee seems to be gaining at Palin's expense. Still, one should not make too much of these numbers. At this stage in the 2008 race (i.e., the fall of 2005), Huckabee was largely unknown outside conservative evangelical circles, and Palin was still the mayor of Wasilla.

In Epic Journey, we discuss Barack Obama's appeal to "wine track" voters. A new USA Today analysis suggests that the Democratic majority in the House rests on an wine track/poverty track coalition:

The Democratic-controlled House is now an unusual combination of the richest and poorest districts, the best and least educated, and the best and the worst insured. The analysis found that Democrats have attracted educated, affluent whites who had tended previously to vote Republican.Democrats now represent 57% of the 4.8 million households that had incomes of $200,000 or more in 2008. In 2005, Republicans represented 55% of those affluent households. ... "The story is really education," says David Wasserman of the non-partisan Cook Political Report.He says "educated, wine-drinking Democrats" and poorer minority voters are an effective coalition because both groups are increasing in numbers. Even so, Wasserman expects Democrats to lose up to two dozen seats in the 2010 congressional elections, especially in poorer, white districts."

Gallup reports some good news for the congressional GOP:

Roughly a year before the 2010 midterm elections, Gallup finds the Republican and Democratic Parties nearly tied in the congressional ballot preferences of registered voters. Forty-six percent of registered voters say they would vote for the Democrat and 44% say the Republican when asked which party's candidate they would support for Congress, if the election were held today.

Other Gallup data suggest one reason for the change:

Americans' approval of the job Congress is doing is at 21% this month, down significantly from last month's 31% and from the recent high of 39% in March.

Cameron Joseph has a perceptive analysis of the Scots-Irish vote at The Atlantic:

The populist fury aimed at President Obama and his fellow Democrats may have roots much deeper than health care. In fact, it may be that it can be traced back to the emigration of the Scots-Irish, the first white group to settle interior America.They've been called rednecks, hillbillies and crackers. In the modern parlance of political correctness, they've been referred to as the Bubba vote. They live in Sarah Palin's "real America," and they make up the majority of Reagan Democrats. They count as distant relatives at least twelve U.S. presidents, from Andrew Jackson to Teddy Roosevelt and Ronald Reagan to Bill Clinton and even to Barack Obama, yet the Scots-Irish remain largely ignored as an ethnic group in America

Chicago's loss of the Olympics is a political problem for President Obama. His efforts went far beyond the last-minute Copenhagen trip.

Sen. Barack Obama made a surprise public appearance in Chicago today, speaking for about 5 minutes just after 12 pm at a downtown event to rally Chicagoans around their city's bid for the 2016 Olympics. Chicago is one of four cities being considered for the Olympic Games (the others are Tokyo, Rio de Janeiro, and Madrid). “It's a good time to be in Chicago,” Mr. Obama started off.“White Sox are winning. Cubs are winning. And Chicago's going to win the 2016 Olympics and Paralympics. And your senator, he's winning too.”

It didn't take long for Barack Obama to start playing a significant role in promoting Chicago's bid for the 2016 Summer Olympics.About 15 minutes into Chicago's Friday presentation of its bid plans to the general assembly of the European Olympic Committees, the president elect gave an 85-second videotaped address to an audience that included some two dozen International Olympic Committee members. ... ``While I am unable to be there in person, I wanted to take this opportunity to speak with you because I deeply believe in the Olympic movement and have long supported hosting the Olympic and Paralympic Games in my home city of Chicago.