From YouGov, yet another stinging poll result for President Obama:


Many Americans think that Vladimir Putin was the most effective leader during the Syrian chemical weapons crisis, while approval for how Obama handled the crisis is still low.

Although Syria appears to have met the first deadline in its agreement with the United States and Russia, beginning the process of turning over its chemical weapons, few Americans trust it will fulfill its promises. That leaves President Obama in a difficult position: he continues to have little support for action against Syria, and Americans continue to disapprove of how he is handling this crisis. Worse for him, perhaps, the latest Economist/YouGov Poll finds twice as many Americans giving Russian President Vladimir Putin the nod over President Obama as the most effective leader in this crisis. 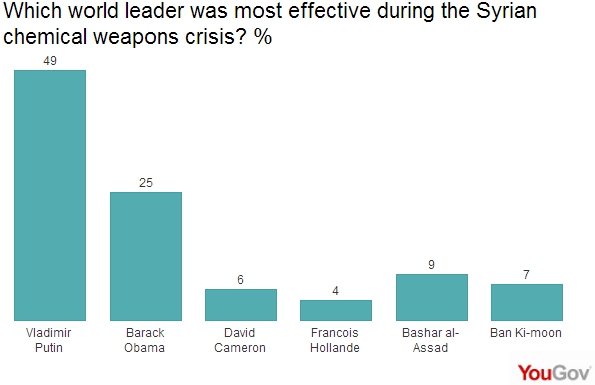