Donald Trump expanded his argument against a Mexican judge [sic:  the judge is an Indiana-born American] on Sunday, suggesting that a Muslim judge may not be able to rule impartially in a Trump lawsuit either because of his call for a temporary ban on Muslim immigration.

It’s the extension of an argument that has rattled even many Republicans who have called the argument racist for suggesting a judge couldn’t rule fairly based on his ethnicity. But Trump, showing no signs of backing off the suggestion, indicated that he’d include other groups as well.

Quizzed by CBS’ John Dickerson in an interview that aired Sunday on “Face the Nation,” Trump said he’d have similar concerns about a Muslim judge.

“It's possible, yes. Yeah. That would be possible, absolutely,” he said.

"Oh, look at my African-American over here. Look at him," Trump said. "Are you the greatest?"

Trump's remark came as he recalled an incident in March when a black supporter of his assaulted a protester at a rally in Arizona as he was being escorted out of the building by police. The comment didn't generate a noticeable response from Trump's audience.

On Saturday, Trump shared a tweet from "@Don_Vito_08"  that purported to show an African American family on the “Trump Train.”  But the family in question does not support Trump.  @Don_Vito_08 had merely copied it from an article by Cincinnati station WCPO on the Midwest Black Family Reunion.  In March, Trump retweeted an unflattering image of Heidi Cruz compared with his wife, Melania. That tweet and image also came from @Don_Vito_08. 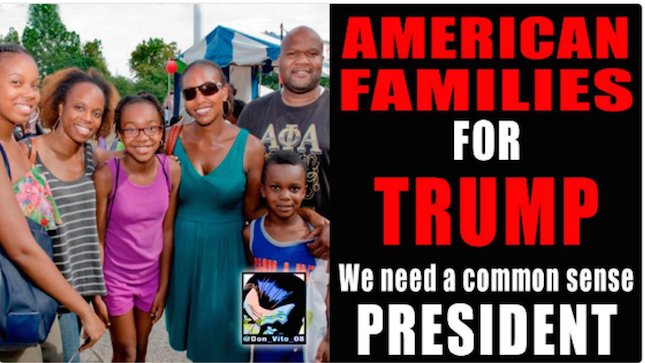