A Very Bad Day for Trump

In Defying the Odds, we discuss the 2016 campaign. The 2019 update includes a chapter on the 2018 midterms. The 2020 race, the subject of our next book, is well underway.   It unfolds as Coronavirus presents unprecedented challenges to public policy and the electoral process.

"It effects virtually nobody. It's an amazing thing."
#SuperSpreaderInChief - September 22 pic.twitter.com/OYwDdCndwN

Soon after saying that COVID affects virtually nobody, Trump and his wife caught it.
David Siders and Charlie Mahtesian at Politico:

A president who once seemed impervious to October surprises is suddenly confronting one big enough to alter the outcome of the election.

“The campaign as we knew it is over,” said Andrew Feldman, a Democratic strategist in Washington. “This is the worst nightmare for the Trump campaign.”

Practically speaking, Trump’s announcement early Friday that he tested positive for the coronavirus will immediately remove him from in-person campaigning, though for how long is unclear. Sean Conley, Trump's physician, said in a memo that Trump and First Lady Melania Trump, who also tested positive, “plan to remain at home within the White House during their convalescence,” and the White House removed a planned campaign rally on Friday night in Florida from Trump’s daily schedule.

The more significant problem for Trump is that, now Covid-positive, it will prove almost impossible for him to steer public attention away from his biggest political liability. Americans disapprove of Trump’s handling of the coronavirus pandemic by a wide margin. And cable news is going wall-to-wall with coverage of that — not U.S. Supreme Court nominee Amy Coney Barrett, mail-in balloting or Trump’s latest outrage.

And the economy sucks, too.  Jeff Cox at CNBC:

Nonfarm payrolls rose by a lower than expected 661,000 in September and the unemployment rate was 7.9%, the Labor Department said Friday in the final jobs report before the November election.

Economists surveyed by Dow Jones had been expecting a payrolls gain of 800,000 and the unemployment rate to fall to 8.2% from 8.4% in August. The payrolls miss was due largely to a drop in government hiring as at-home schooling continued and Census jobs fell.


“The issue is momentum, and I think we’re losing it,” said Drew Matus, chief market strategist for MetLife Investment Management. “When you go through a significant disruption to the labor market, it takes time to fix itself. That’s without regard to whether there’s a virus.” 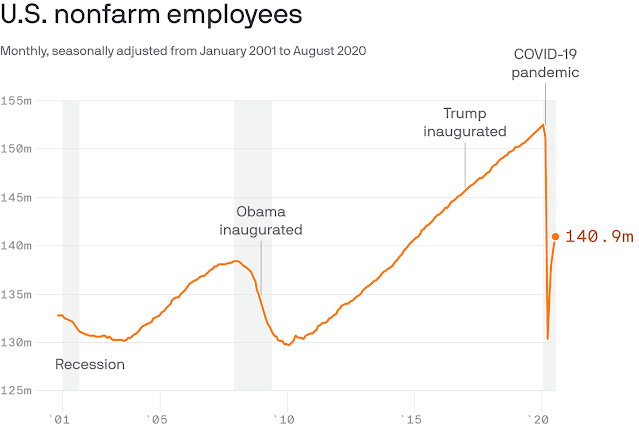 About one-third of U.S. adults (35%) said they personally owned stocks, bonds or mutual funds outside of retirement accounts in a Pew Research Center survey from September 2019. And upper-income Americans were much more likely than lower-income Americans to be invested in the market.

That same survey found that more Americans said wages, the availability of jobs and the cost of health care mattered in their assessment about how the economy is doing, rather than how the stock market is performing. To be sure, the labor market, the health care system and the stock market have been shaken over the past six months. For those who have experienced job or wage loss during the coronavirus pandemic, the job situation may be even more top of mind now.