In Defying the Odds, we discuss the 2016 campaign. The 2019 update includes a chapter on the 2018 midterms. The 2020 race, the subject of our next book, is well underway.  Trump is weaponizing the federal government for his political benefit.
Dan Diamond at Politico:

Caught by surprise by President Donald Trump’s promise to deliver drug-discount cards to seniors, health officials are scrambling to get the nearly $8 billion plan done by Election Day, according to five officials and draft documents obtained by POLITICO.

The taxpayer-funded plan, which was only announced two weeks ago and is being justified inside the White House and the health department as a test of the Medicare program, is being driven by Centers for Medicare and Medicaid Services Administrator Seema Verma and White House chief of staff Mark Meadows, the officials said. The administration is seeking to finalize the plan as soon as Friday and send letters to 39 million Medicare beneficiaries next week, informing seniors of Trump's new effort to lower their drug costs, although many seniors would not receive the actual cards until after the election.

The $200 cards — which would resemble credit cards, would need to be used at pharmacies and could be branded with a reference to Trump himself — would be paid for by tapping Medicare's trust fund.

“The goal is to begin the test by distributing cards starting in October 2020,” according to a draft proposal circulated within the White House last week and obtained by POLITICO.

Career civil servants have raised concerns about the hasty plan and whether it is politically motivated, particularly after Verma pushed Medicare officials to finalize the plan before the Nov. 3 election, said two officials.

The plan to lower seniors' drug costs comes as administration officials grapple with Trump's falling support among older Americans, a significant threat to his re-election. Trump is currently lagging challenger Joe Biden by as much as 27 points in recent polls among Americans ages 65 and older, a major reversal from the 2016 campaign, with seniors now voicing concerns about Trump's handling of the coronavirus pandemic and his chaotic leadership style.

Perdue's reprimand comes after the USDA chief has increasingly blurred the lines between his public duties and his political support for Trump, as POLITICO reported on Monday.

At an event with Trump and North Carolina food producers in August, meant to showcase the Agriculture Department’s coronavirus relief efforts, Perdue offered a lengthy endorsement of the president that sent the audience into a chant of “Four more years!” The secretary praised Trump as a champion for “forgotten people” and a tireless worker with “business speed, not government speed,” among other plaudits.

Citizens for Responsibility and Ethics in Washington, a nonpartisan watchdog group, filed a formal complaint that Perdue’s remarks were a clear violation of the Hatch Act. The special counsel's office on Thursday concluded that Perdue had indeed crossed the line and ordered him to reimburse the government for travel expenses and other costs of his involvement in the North Carolina event.

“Taken as a whole, Secretary Perdue’s comments during the August 24 event encouraged those present, and those watching remotely, to vote for President Trump’s reelection,” the office wrote. “His first words were not about USDA, but about the president’s 2016 and 2020 campaigns.”

Three hundred million dollars — that’s how much the Trump Administration intends to spend on an ad campaign to buck up a country that is beleaguered by one of the highest coronavirus death rates in the world. The media blitz planned by the Department of Health and Human Services will reportedly feature inspirational videos from administration officials and celebrities, including actor Dennis Quaid and singer CeCe Winans.

Three hundred million dollars is a lot of money, and it is dubious that an advertising campaign even of that magnitude can cheer up Americans who have lost their businesses or jobs, are struggling to arrange schooling for their children, and working to keep their marriages together and stay healthy. Also troubling is the timing of the “defeat despair” campaign, beginning shortly before the election, which adds an unsavory and self-serving taint to the enterprise. Congressional Democrats are also vexed that this money, which they appropriated to the Centers for Disease Control and Prevention, is being redirected in part to a crony of controversial HHS spokesman Michael Caputo.

But the waste and abuse of taxpayer dollars is not the only reason for outrage. It’s that there’s a better label for this type of ad campaign, one that aims to stir positive emotions in contravention of the facts. It’s called propaganda, and it’s a form of communication that many Americans have trouble recognizing. 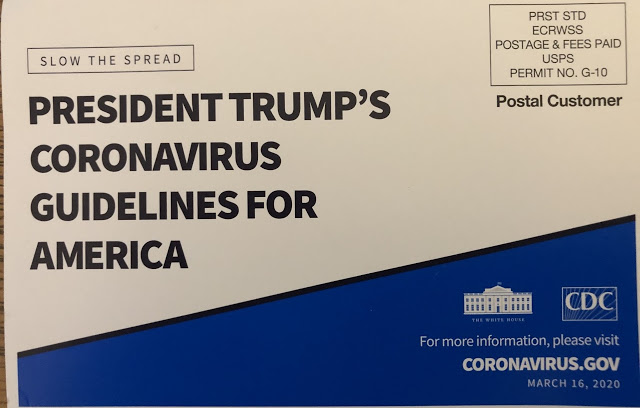 The Trump administration has not yet repaid the United States Postal Service more than six months after the agency sent out COVID-19 guidelines on postcards prominently featuring the president’s name.

USA TODAY reported earlier this year the total cost of printing and mailing the postcards was $28 million, with a total printing cost of $4.6 million, and the Trump administration was negotiating the reimbursement with the Postal Service for the cost.

But the bill for the postcards sent to 138 million residential addresses has still not been paid.

“No reimbursements have been made at this time,” said Postal Service spokesperson David Partenheimer.