Rubio's debate performance last night got brutal reviews.  John Podhoretz is one of many:

The most consistently excellent debater in the Republican field had a dreadful five minutes in the debate’s opening portion. Under relentless attack from New Jersey Governor Chris Christie, who likened him to Barack Obama in 2008 as an inexperienced lightweight in over his head, Rubio found himself defaulting to the exact same sound bite four times over — and I mean exact.

“There it is,” Christie said, “the memorized 25-second speech.”

Unfortunately for Rubio, many New Hampshire voters read this paper: 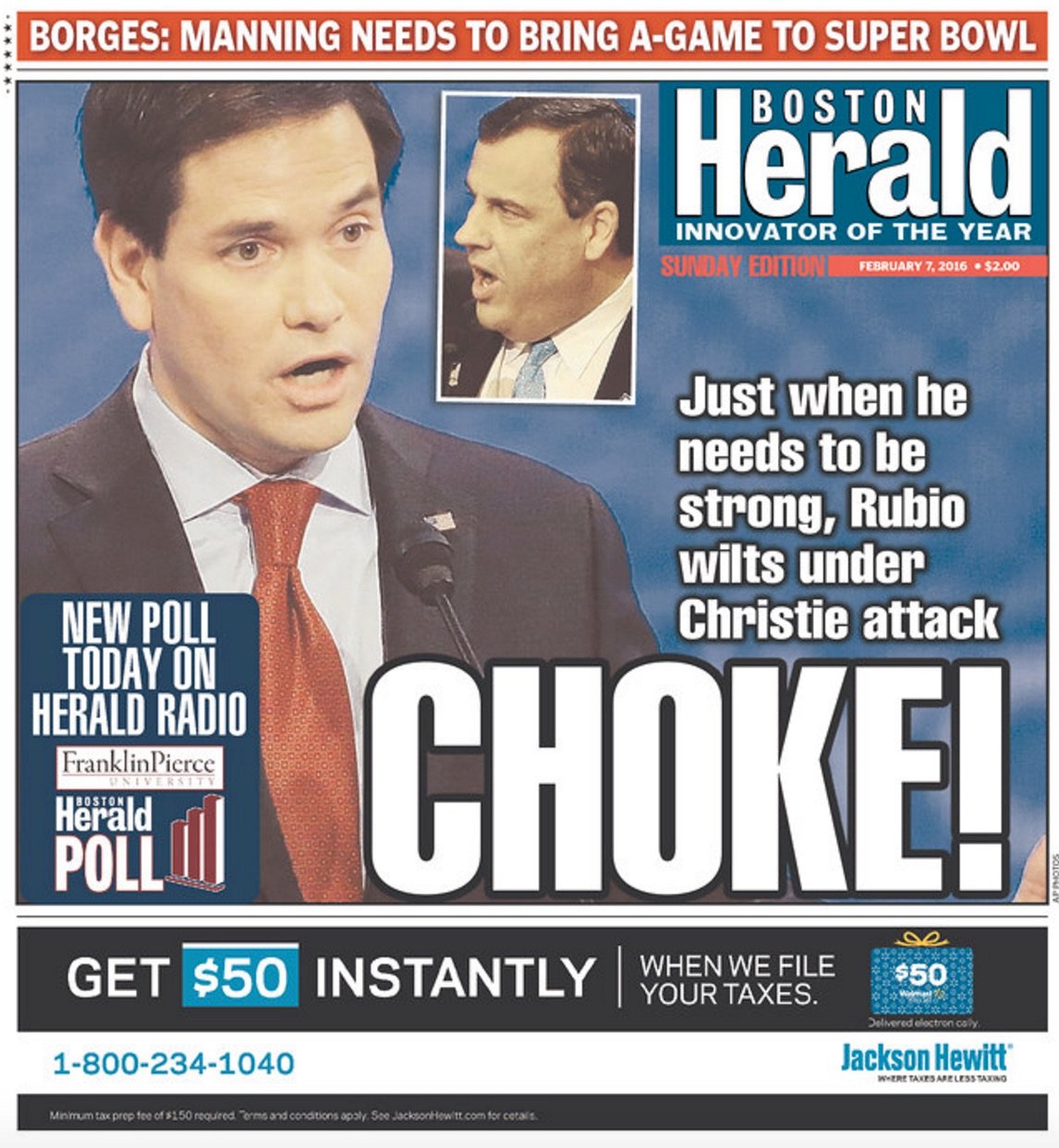 How many New Hampshire voters saw a Saturday night debate on Super Bowl weekend?  Will the stories about Rubio influence voters who did not see the debate? How many will care?   The answers will be obvious by Wednesday morning. Meanwhile, Nate  Silver wisely urges caution:


As I wrote after the previous debate, political reporters are in the “fog of war” phase of the campaign where our reactions aren’t necessarily good matches for those of voters at home. Some of the reason we reporters thought Rubio’s answer was so awful is because it confirmed some of our gossip about Rubio, namely that he tends to give pat, repetitive answers. But we tend to be more sensitive about that stuff, because we watch every debate from start to finish, and then we see lots of the candidates’ stump speeches and town halls on top of it. There’s a fine line between a candidate who seems stilted and repetitive and one who seems “on message” instead.

Is there any evidence that home viewers saw Rubio’s performance differently? Well, maybe. On Google Trends, there was a huge spike in searches for Rubio during the debate — but it came not during his glitchy moments but instead after an effective answer he delivered on abortion about two hours into the debate. Meanwhile, a Google Consumer Surveyspoll conducted midway through the debate found respondents thought that Trump, Rubio and Cruz (in that order) were winning the debate. Undoubtedly, this mostly just reflects the fact that Trump, Rubio and Cruz are the most popular Republican candidates to begin with, but it’s also a reminder that one bad answer, or one bad evening, may not weigh all that much on voters’ minds.