Matea Gold reports at The Washington Post that the Mercers, unlike the Kochs, have focused more on media than voter mobilization.


The Mercers’ partnership with Bannon began in 2011, thanks to an encounter that Robert and Rebekah had with Andrew Breitbart.

During a spring meeting of Club for Growth donors at the Ritz Carlton in Palm Beach, Fla., the Mercers sought out Breitbart after watching him deliver a talk about how to co-opt the political strategies used by liberals.

The conservative media entrepreneur, who liked to denounce the mainstream press as the Democrats’ “dominant partner in crime,” was arguing at the time that government policies could not be changed until conservatives seized control of the media narrative.

The message resonated with the Mercers, according to a person familiar with their views.
Breitbart introduced them to Bannon, then a screenwriter and producer in Southern California who was directing a movie called “Occupy Unmasked” that featured Breitbart. It was co-produced by the conservative advocacy group Citizens United, whose allied foundation would later receive Mercer funds. 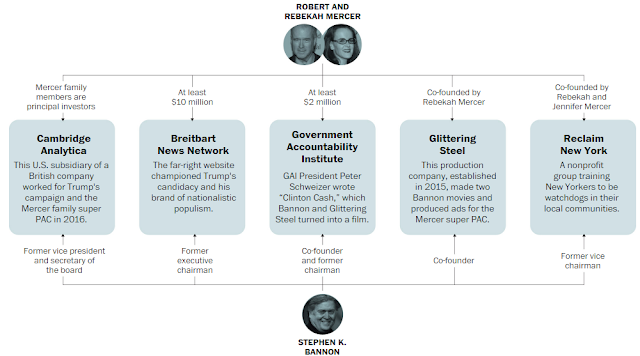 Jane Mayer at The New Yorker:

The Mercers also joined the Council for National Policy, which the Times has described as a “little-known club of a few hundred of the most powerful conservatives in the country.” The Mercers have contributed hundreds of thousands of dollars. The group swears participants to secrecy. But a leaked 2014 roster revealed that it included many people who promoted anti-Clinton conspiracy stories, including Joseph Farah, the editor of WorldNetDaily. The group also brought the Mercers into the orbit of two people who have become key figures in the Trump White House: Kellyanne Conway, who was on the group’s executive committee, and Steve Bannon.