In Defying the Odds, we discuss Trump's record of scandal.


The choice of servants is of no little importance to a prince, and they are good or not according to the discrimination of the prince. And the first opinion which one forms of a prince, and of his understanding, is by observing the men he has around him; and when they are capable and faithful he may always be considered wise, because he has known how to recognize the capable and to keep them faithful. But when they are otherwise one cannot form a good opinion of him, for the prime error which he made was in choosing them.
-- Machiavelli


President Trump reimbursed Michael D. Cohen, his longtime personal lawyer, for a $130,000 payment that Mr. Cohen has said he made to keep a pornographic film actress from going public before the 2016 election with her story about an affair with Mr. Trump, according to Rudolph W. Giuliani, one of the president’s lawyers.

That statement, which Mr. Giuliani made Wednesday night on Fox News, contradicted the president, who has said he had no knowledge about any payment to the actress, Stephanie Clifford, to keep quiet before the election.


Asked specifically last month by reporters aboard Air Force One whether he knew about the payment, Mr. Trump said, “No,” and referred questions to Mr. Cohen. He was then asked, “Do you know where he got the money to make that payment?”

In an interview with The New York Times shortly after his Fox News appearance, Mr. Giuliani, the former New York mayor and longtime Trump confidant who recently joined the president’s legal team, said that he had documentation showing that Mr. Trump had personally made the payment. Mr. Giuliani indicated that the goal was to conclusively demonstrate that there was no campaign finance violation involved.

Kellyanne's husband has a different take on the law: 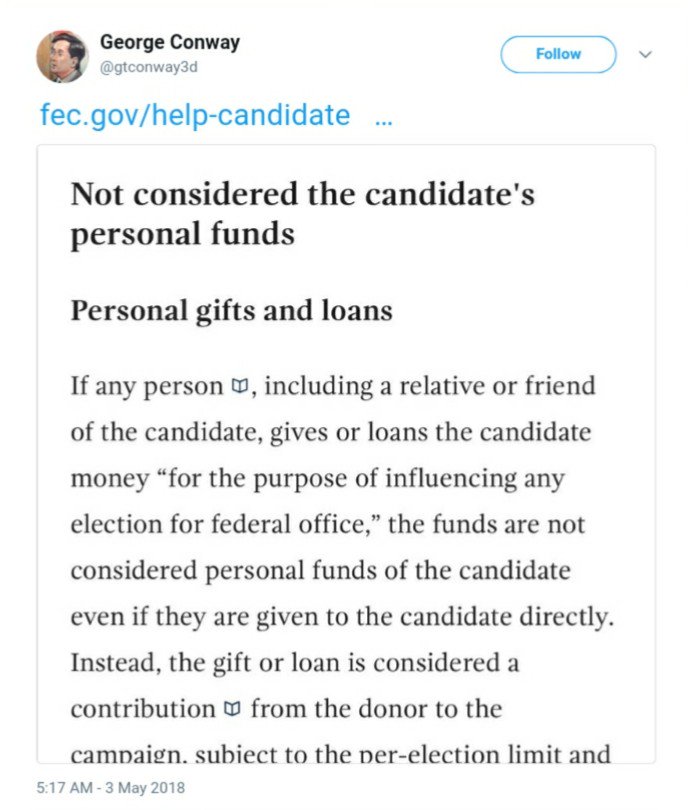 Was the payoff a way to avoid trouble with Melania -- as if she didn't know that Trump is an adulterer -- or a way to influence the election?  Giuliani did not help his cause this morning.