The Debate and the Danger of Veering Left

In Defying the Odds, we discuss leftward drift of the Democratic Party.  The update -- recently published -- includes a chapter on the 2018 midterms.


At Thursday’s Democratic debate, the second of two held this week in Miami, Biden was called to account for his views.

Sen. Kamala D. Harris of California, claiming authority to speak on the issue of race “as the only black person on this stage,” assailed the former vice president for touting his ability to work with segregationist senators.

She specifically hammered him for his position on busing.

“And it was not only that, but you also worked with them to oppose busing,” she said, revealing that she herself had traveled across districts as part of the second class of students bused to integrate the public schools in Berkeley, Calif.

Democrats might not want to lead with the issue of busing.  There has not been any recent polling on the issue, but past surveys strongly suggest that the general public hates the  idea.


In 1999, 15 percent of Americans favored “transferring students for integration” instead of letting students attend local schools, according to Gallup polling.

And in 2007, polling conducted by Pew revealed that 59 percent of Americans would prefer that students stay in their local schools even if that meant most students would be of the same race.


Four of the 20 candidates raised their hands when asked who would do away with private health insurance. Sen. Bernie Sanders (sponsor of the Medicare For All bill), Sen. Elizabeth Warren (co-sponsor of the MFA bill), Sen. Kamala Harris (co-sponsor of the MFA bill), and New York City Mayor Bill de Blasio. Sen. Kirsten Gillibrand countered on night two of the debate that the quickest way to get to a single payer system would be not to eliminate private health coverage, but to “compete with insurers.”

Kamala Harris quickly flip-flopped, saying that she misunderstood the question, even though it came up the night before.  No wonder. A Kaiser Family Foundation found that support for Medicare-for-All plummets when people find out that it would eliminate private health insurance: 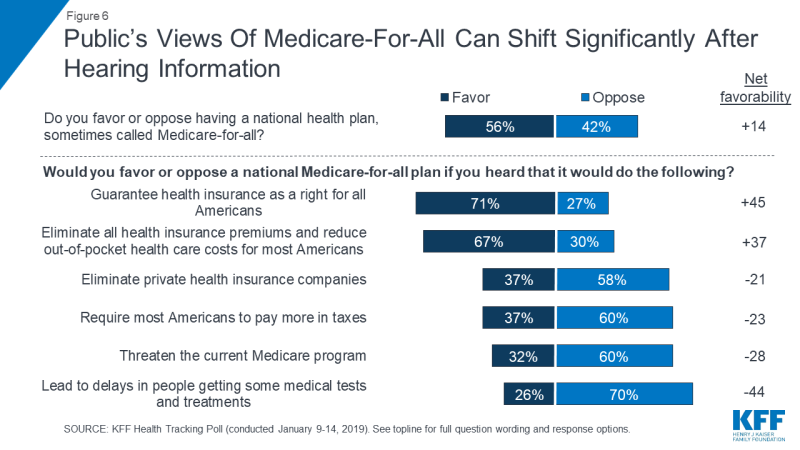