Here is an after-action review by the Obama campaign.

A graph of the ground game: 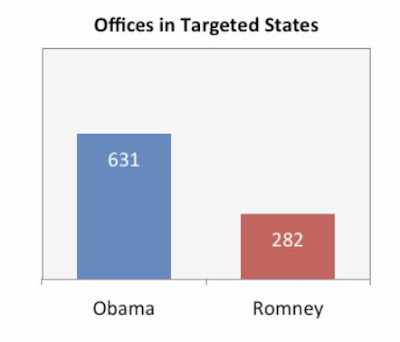 The importance of the personal touch:


Finding the right messengers to deliver this persuasion message was critical. Ensuring that even national issues are presented in the language of the individual’s own backyard was important. The bottom line was simple: the more familiar and local the messenger to the voter, the better the results. An OFA post-election survey clearly found that Obama campaign contacts were more effective in helping voters make up their minds because those conversations were conducted by neighbors talking to neighbors.

The importance of early voting:


Early vote offered eligible voters expanded access and convenience to voting in many important states across the country. Overall, the campaign’s effort to encourage supporters to take advantage of this opportunity was tremendously successful. Not only did a record number of voters turn out, but many were the voters who the campaign had specifically prioritized for early vote: sporadic supporters. In many early vote states, Romney won a majority of the votes cast on Election Day but, because the President’s early-vote margin was so high, Romney could not catch up.

If Republicans read it and apply its lessons, perhaps they can have a Patton moment in 2 to 4 years: