As a previous post noted, the president repeatedly claimed that if you liked your health insurance plan, you could keep it.


If you like your plan and your doctor, you can keep them. The only changes that you'll see are lower costs and better health care.

That claim has proved false.  In California alone, 800,000-900,000 people will have to switch policies.  At The Washington Post, Glenn Kessler gives the pledge four Pinocchios:


The administration is defending this pledge with a rather slim reed — that there is nothing in the law that makes insurance companies force people out of plans they were enrolled in before the law passed. That explanation conveniently ignores the regulations written by the administration to implement the law. Moreover, it also ignores the fact that the purpose of the law was to bolster coverage and mandate a robust set of benefits, whether someone wanted to pay for it or not.

The president’s statements were sweeping and unequivocal — and made both before and after the bill became law. The White House now cites technicalities to avoid admitting that he went too far in his repeated pledge, which, after all, is one of the most famous statements of his presidency.

Like "Read My Lips: No New Taxes," the pledge has to count as a broken promise.  But was it a lie?  It is possible that the president meant it at first.  In that case, it was not a deliberate deception, but rather a commitment that he later failed to keep -- which is different.  The trouble is that the president and his administration kept repeating it long after the truth was obvious. On March 23 of this year, he said:  "If you like the plan you have, you can keep it."

As of the morning, the White House website still features this egregiously false statement: 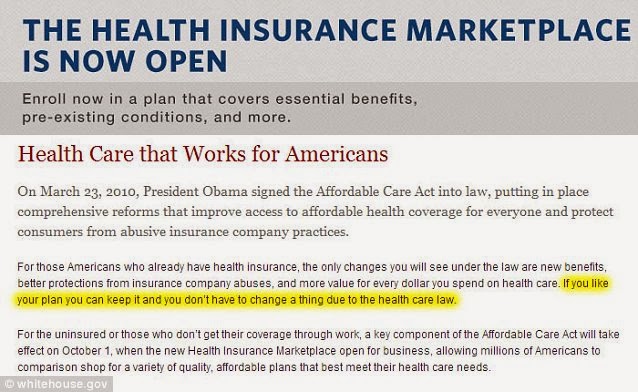