In Defying the Odds, we discuss the 2016 campaign. The 2019 update includes a chapter on the 2018 midterms. The 2020 race, the subject of our next book, is well under way. Coronavirus presents unprecedented challenges to the electoral process.

At The Guardian, Lloyd Green sums up:

Pro tip: turning a race into a referendum on Fidel Castro as Sanders did is a bad idea. In the Sunshine state, Biden’s margin was nearly 40 points. Looking back, the Vermont senator’s 2016 performance was more a function of disdain for Hillary Clinton than his call to revolution.

Biden has built a rainbow coalition that cuts across class. Indeed, the Delaware Democrat captured the votes of white people without college degrees, a prize that eluded Clinton and a bloc Donald Trump calls his own. A global pandemic and a market crash will sorely test the president’s hold.

As for Sanders, his quest has morphed into the quixotic, an exercise in rule or ruin, or all of the above. Reportedly, he will continue to tilt at windmills into late April, waging war in Pennsylvania and New York. But he lost both states four years ago and there is no reason to assume this time will be different.

Biden has now amassed more than 1,000 delegates, more than half way to clinching the nomination. The primary battle is over in all but name. 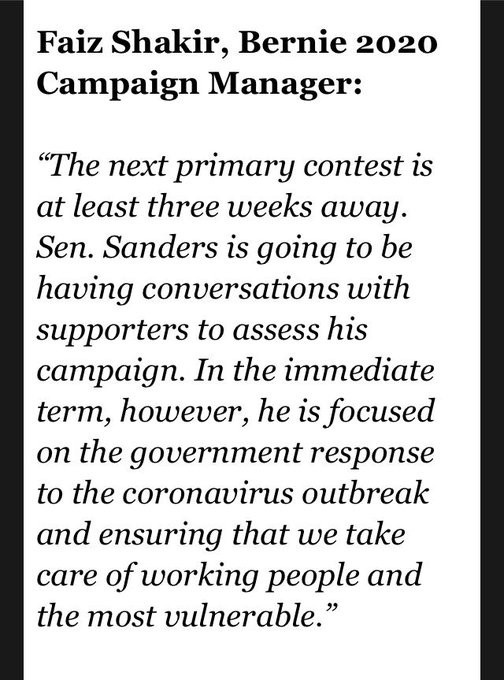 See Laura Litvan's other Tweets
There was some good news for Democatic progressives.  Cameron Joseph reports at Vice:


One of the last — and loudest — pro-life Democrats left in Congress lost his primary Tuesday night.

Newman came just short of beating Lipinski two years ago, with the backing of a broad coalition of progressive groups. This time, she jumped into the election early, and they lined up to boost her past Lipinski, outspending him by a wide margin. EMILY’s List, which backs pro-choice Democratic women, backed Newman early on, as did a plethora of other groups including NARAL Pro-Choice America, Planned Parenthood Action Fund, MoveOn, Indivisible, The Sierra Club, Service Employees International Union and Our Revolution.

And note Cam's observations on the decline of traditional machine politics:


[Lipinski had] largely avoided tough primaries in the solidly Democratic district because of strong support from the Chicago Democratic machine. Lipinski was handed his seat in Congress by his father, former Rep. Bill Lipinski (D-Ill.), and has a close relationship with Illinois House Speaker Mike Madigan (D), who runs the state party and the city’s machine.

But that machine has weakened in recent years — and Lipinski’s district has continued to grow more liberal and more heavily Hispanic. After barely surviving in 2018, it was too much for him this time around.