In Defying the Odds, we discuss Trump's dishonesty and his record of disregarding the rule of law.  Our next book, Divided We Stand, looks at the 2020 election.

The Justice Department’s top leaders listened in stunned silence this month: One of their peers, they were told, had devised a plan with President Donald J. Trump to oust Jeffrey A. Rosen as acting attorney general and wield the department’s power to force Georgia state lawmakers to overturn its presidential election results.

The unassuming lawyer who worked on the plan, Jeffrey Clark, had been devising ways to cast doubt on the election results and to bolster Mr. Trump’s continuing legal battles and the pressure on Georgia politicians. Because Mr. Rosen had refused the president’s entreaties to carry out those plans, Mr. Trump was about to decide whether to fire Mr. Rosen and replace him with Mr. Clark.

The department officials, convened on a conference call, then asked each other: What will you do if Mr. Rosen is dismissed?

The answer was unanimous. They would resign.

Their informal pact ultimately helped persuade Mr. Trump to keep Mr. Rosen in place, calculating that a furor over mass resignations at the top of the Justice Department would eclipse any attention on his baseless accusations of voter fraud. Mr. Trump’s decision came only after Mr. Rosen and Mr. Clark made their competing cases to him in a bizarre White House meeting that two officials compared with an episode of Mr. Trump’s reality show “The Apprentice,” albeit one that could prompt a constitutional crisis.

But the full extent of the Trump campaign’s ties to the protests may not be not fully known due to its use of shell companies that hide details of its financial dealings and the central role “dark money” played in the protests.

Multiple individuals listed on the permit granted by the National Park Service worked for Trump’s presidential campaign, as first reported by the Associated Press over the weekend. That raises new questions about the Trump campaign’s lack of spending transparency and the unknown extent of the event’s ties to Trump aides.

Trump’s campaign disclosed paying more than $2.7 million to the individuals and firms behind the Jan. 6 rally. But FEC disclosures do not necessarily provide a complete picture of the campaign’s financial dealings since so much of its spending was routed through shell companies, making it difficult to know who the campaign paid and when. 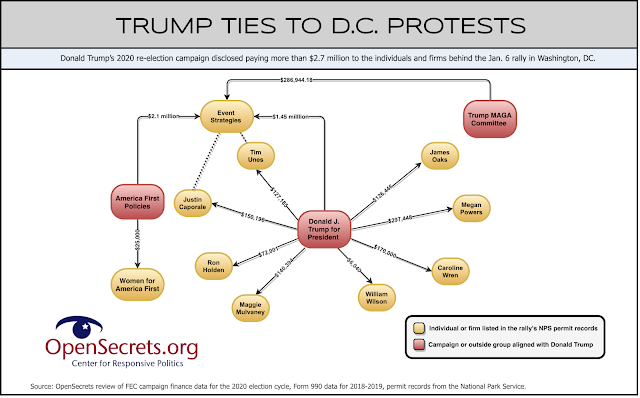