Polarization and Approval of Violence

Our book, Divided We Stand, looks at the 2020 election and the January 6 insurrection.  Some Republican leaders -- and a measurable number of rank-and-file voters -- are open to violent rebellion, coups, and secession.

One year after the deadly attack on the U.S. Capitol, Republicans and Democrats are deeply divided over what happened that day and the degree to which former president Donald Trump bears responsibility for the assault, amid more universal signs of flagging pride in the workings of democracy at home, according to a Washington Post-University of Maryland poll.

Partisan divisions related both to the Jan. 6 assault and the 2020 presidential election color nearly every issue raised in the survey, from how much violence occurred at the Capitol that day to the severity of the sentences handed down to convicted protesters to whether President Biden was legitimately elected. Only on a question about injured law enforcement officers is there broad bipartisan agreement.

The percentage of Americans who say violent action against the government is justified at times stands at 34 percent, which is considerably higher than in past polls by The Post or other major news organizations dating back more than two decades. Again, the view is partisan: The new survey finds 40 percent of Republicans, 41 percent of independents and 23 percent of Democrats saying violence is sometimes justified.

...
The ABC/Ipsos poll, which was conducted by Ipsos in partnership with ABC News using Ipsos' KnowledgePanel, also shows strongly aligned views among Democrats regarding Trump's responsibility for the attack, with 91% believing Trump bears either "a great deal" or "a good amount" of responsibility for it. On the other hand, a strong majority (78%) of Republicans believe the former president bears "just some" or no responsibility for the day's events. 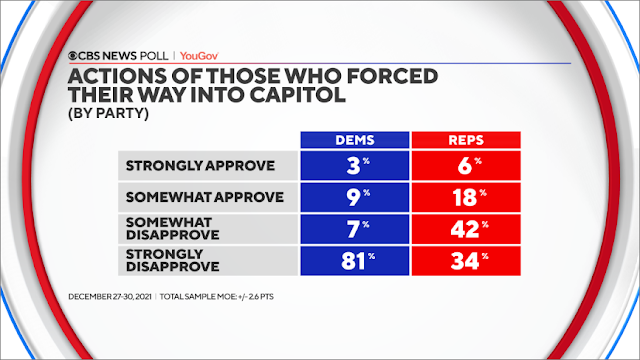 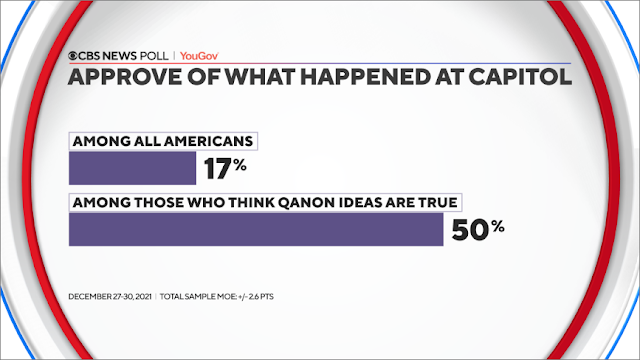