At Politico, James Hohmann reports that Romney and Gingrich are up, Cain and Perry are down:

A deeper look at the numbers, however, suggests recently revealed past sexual harassment claims against Cain have caused some voters to reconsider their support. A high-profile press conference held by one accuser, Sharon Bialek, and her attorney Gloria Allred last Monday seems to have been a tipping point.

Among likely Republican voters surveyed Sunday, Nov. 6, Cain led the field with 40 percent. On Monday, he was third with 22 percent. By Wednesday, just 19 percent of those surveyed said they supported Cain for the nomination.

“It does appear that the stories are certainly hurting him,” said Republican pollster Ed Goeas of The Tarrance Group, who helped conduct the bipartisan poll. “As this moves forward, I think it does become more and more a deal-breaker.”

Asked who they would support if Cain was not in the race, Cain supporters broke evenly for Romney and Newt Gingrich. Each saw a 7 percent overall increase if Cain was not an option. The two Texans in the race also got a boost: Rep. Ron Paul by 5 percent and Perry by 3 percent. 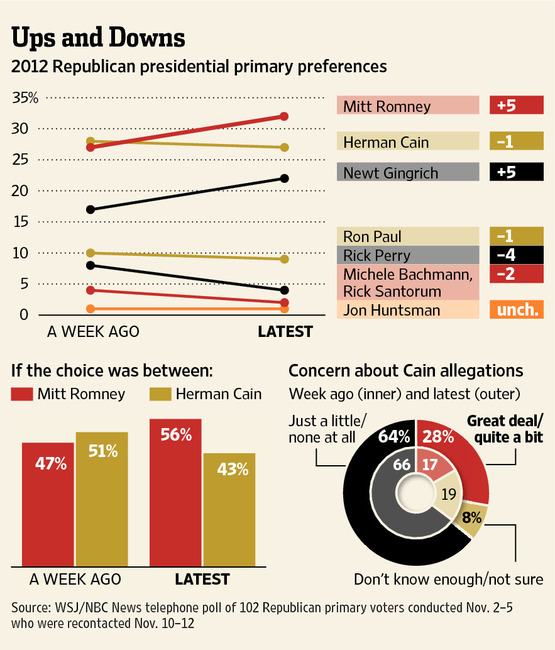