National Review has declared war on Trump. The latest issue features salvos from a number of conservative writers and this editorial:

Donald Trump leads the polls nationally and in most states in the race for the Republican presidential nomination. There are understandable reasons for his eminence, and he has shown impressive gut-level skill as a campaigner. But he is not deserving of conservative support in the caucuses and primaries. Trump is a philosophically unmoored political opportunist who would trash the broad conservative ideological consensus within the GOP in favor of a free-floating populism with strong-man overtones.

...
It is unpopular to say in the year of the “outsider,” but it is not a recommendation that Trump has never held public office. Since 1984, when Jesse Jackson ran for president with no credential other than a great flow of words, both parties have been infested by candidates who have treated the presidency as an entry-level position. They are the excrescences of instant-hit media culture. The burdens and intricacies of leadership are special; experience in other fields is not transferable. That is why all American presidents have been politicians, or generals. 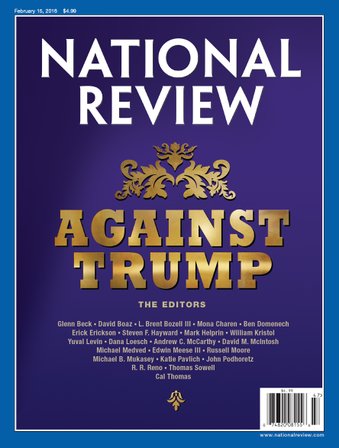 Donald J. TrumpVerified account‏@realDonaldTrump
National Review is a failing publication that has lost it's way. It's circulation is way down w its influence being at an all time low. Sad!
6:56 PM - 21 Jan 2016
The Washington Post reports:


With a massive winter storm expected along the East Coast this weekend, perhaps some of the 35 percent of Republicans who support the real estate mogul-reality TV star will be buried in actual snow, with nothing better to do than read all 9,000 words and change their minds.

Or perhaps they will dismiss "Against Trump" — the title of this special collection by one of the nation's preeminent conservative publications — as just another chorus of naysaying from the loathsome, out-of-touch "establishment." (The National Review did just get dropped as a debate sponsor by the Republican National Committee, however, which might help the magazine appear less establishment-y.)