Trump and the Alt-Right

Clinton's meeting with the FBI could have been on occasion to focus on ethics issues.  Instead, Trump made his own bigotry the story of the weekend.  David Weigel writes:


It was so close to the message that Republicans say they want from Donald Trump: a tweet describing Hillary Clinton as “crooked” and the “most corrupt candidate ever,” on the morning that the likely Democratic presidential nominee met with the FBI.

But the image that Trump chose to illustrate his point, which portrayed a red Star of David shape slapped onto a bed of $100 bills, had origins in the online white-supremacist movement. For at least the fifth time, Trump’s Twitter account had shared a meme from the racist “alt-right” and offered no explanation why. 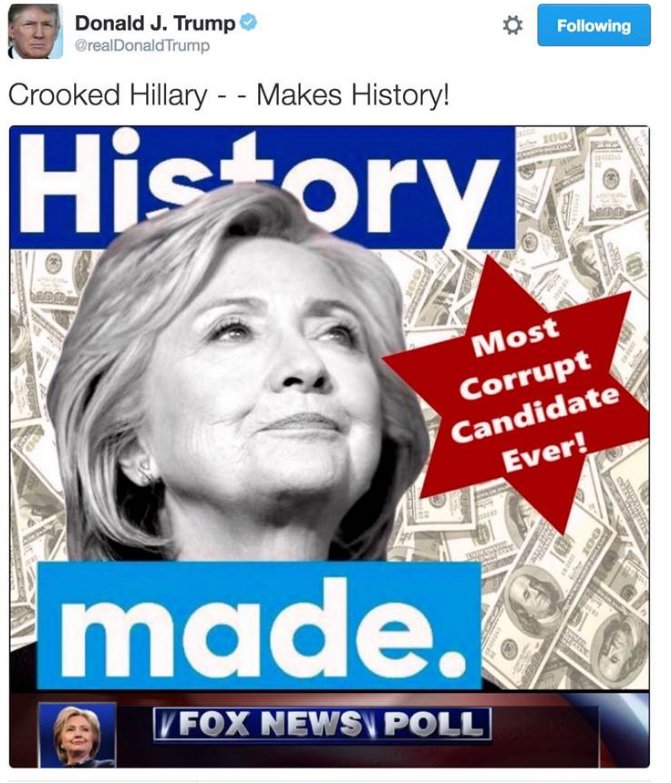 
Though the thread where the meme was featured no longer exists, you can find it by searching the URL in Archive.is, a "time capsule of the internet" that saves unalterable text and graphic of webpages. Doing so allows you to see the thread on /pol/ as it originally existed.

Of note is the file name of the photo, HillHistory.jpg, potentially a nod to the Neo-Nazi code for "HH," or "Heil Hitler," which the alt-right is fond of hiding in plain sight.