There are at least three ways in which this very unconventional election was surprisingly conventional.

First, the polls said that Clinton would win the popular vote.  She did.

Second, the poli sci models were not far off the mark.  John Sides writes at The Washington Post:

In January 2014, I wrote a piece called “The Democrats’ uphill battle to 270 electoral votes.” That piece was predicated on conditions in the country at the time: economic growth, the president’s approval rating and the greater tendency of the White House to change parties after two terms than one term, also knows as “time for a change.”

In March 2016, Michael Tesler, Lynn Vavreck and I drafted an article — subsequently published in August 2016 — in which we suggested that there were mixed signals in the American electorate. People’s views of the economy had recovered, although a variety of political assessments remained more pessimistic. Taken together, economic growth and presidential approval gave the Democrats only a modest chance of winning. If you factored in “time for a change,” the Republicans were favored.

Other early forecasts by political scientists and economist Ray Fair showed the same thing. Vox took several such forecasts, asked two political scientists to average them, and came up with a narrow Republican victory in the national popular vote. Yesterday, the full roundup of these forecasts by Pollyvote said that Clinton would win the popular vote by 0.4 points. Currently, she has a 0.2 percent lead. She will probably exceed that, but the point stands: Those models said it was supposed to be close.

Then, like most observers — including, apparently, the Trump campaign — I believed the forecasting consensus that Hillary Clinton would win and wrote as much yesterday. There were forecasts that gave Trump at least a reasonable shot, including the 24 percent chance given by the forecasters at our partner, Good Judgment. But I went with that consensus and, like others, thought Trump would underperform the average of the political science forecasts. So I was wrong too.

Much will be written about why the polls in particular underestimated Trump’s vote share. It is all the more puzzling because serious attempts to measure the “hidden” Trump vote struggled to find much evidence of them.

But for now, a striking fact is that the election ended up looking a lot like an average of the fundamentals-based models from several months ago.


... I paired successive elections by comparing the Democratic share of the total vote by state to generate correlation coefficients. The state-by-state comparison generates a Pearson correlation coefficient with a low or negative value indicating a disruption or cleavage point and a higher positive value indicating continuity or electoral stability.  Figure 1 presents the results. The changes taking place in the parties' coalitions in the late 1970s and early 1980s are evident as is the rather stable electoral period that emerged in 1996 - a period marked more narrow election victories and the emergence of the familiar Red and Blue states.

Donald Trump pieced together an impressive electoral coalition in the 2016 election, a coalition that included traditionally Democratic states like PA, MI, and WI - yet Figure 1 shows the 2016 election demonstrated a high degree of correlation with the election of 2012 – no fundamental changes took place in 2016. Rather Trump was able to achieve narrow victories in otherwise Democratic states. The results suggest that the present path to 270 electoral votes remains both stable and competitive. 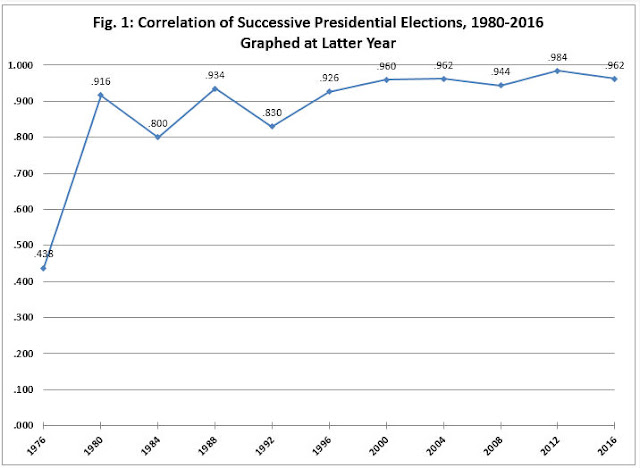