Bad Times for Workers, Especially Those Without College

Income inequality seems to have played a role in Britain's June 23 vote to leave the European Union, a move seen as a populist reaction against immigration, based on new research from Brussels-based Bruegel. In the U.S., Republican Donald Trump has tapped into frustrations about lower-quality jobs with stagnating wages – and new research from White House economists shows why his rallying cry might hold so much appeal.

From the Council of Economic Advisers:


In September, the U.S. Census Bureau reported that in 2015, the typical household saw its income grow by $2,800, or 5.2 percent, the fastest rate on record. Over the course of this business cycle, average annual wage growth has been higher than any business cycle since the early 1970s. This is real progress toward higher incomes for working Americans—a central goal of many of the policy initiatives the Obama Administration has undertaken since 2009.

But while these gains are a step in the right direction, more work remains to fully address long-term challenges of slow wage growth and rising inequality. Over the past several decades, only the highest earners have seen steady wage gains; for most workers, wage growth has been sluggish and has failed to keep pace with gains in productivity (CEA 2015, Ch. 3). Though the slowdown in wage growth is partly due to a slowdown in productivity growth since the 1970s, the share of income accruing to labor has also been falling.

Over the past 15 years, while profits rose, the decline in labor’s share of national income accelerated, reaching its lowest level ever since World War II. And though this trend has begun to show signs of reversal since mid-2014, labor’s share of income is well below the 2000 year level (Figure 1). 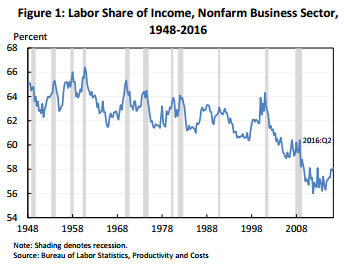 At the same time, labor income itself has become increasingly unequally divided. Researchers have focused on the divergence between worker skills and employer needs—a challenge brought about by technological change and a trend in educational investments that, while rising, has not kept pace with demand, which has risen even faster (Autor 2014; Katz and Murphy 1992; Goldin and Katz 2007). Others have examined more institutional hypotheses, including the erosion of the minimum wage (Autor, Manning, and Smith 2015), the decline of unionization (Card 2001), and changes in the structure of employment (Weil 2014).
Posted by Pitney at 9:40 AM