In Defying the Odds, we discuss the demographic divides of the 2016 campaign.


Record share of college graduates align with Democrats. Voters who have completed college make up a third of all registered voters. And a majority of all voters with at least a four-year college degree (58%) now identify as Democrats or lean Democratic, the highest share dating back to 1992. Just 36% affiliate with the Republican Party or lean toward the GOP. The much larger group of voters who do not have a four-year degree is more evenly divided in partisan affiliation. And voters with no college experience have been moving toward the GOP: 47% identify with or lean toward the Republican Party, up from 42% in 2014.

Larger differences among whites by education. Most white voters with at least a four-year college degree (53%) affiliate with the Democratic Party or lean Democratic; 42% identify as Republicans or lean Republican. As recently as two years ago, leaned partisan identification among white college graduates was split (47% Democrat, 47% Republican). Majorities of white voters with some college experience but who do not have a degree (55%) and those with no college experience (58%) continue to identify as Republicans or lean Republican.


Democrats are rapidly shifting left.  Republicans have long been on the right. 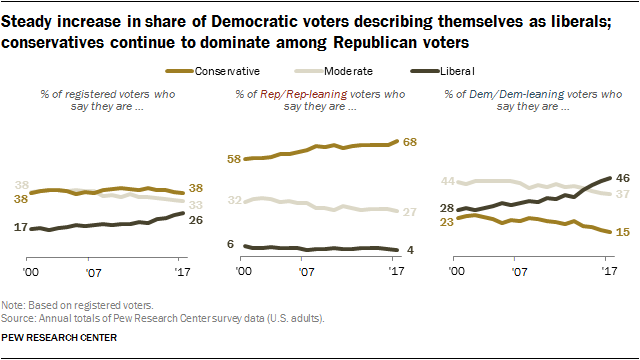 As we note in the book, non-college whites once accounted for a majority of  Democrats.  Now they are only one-third: 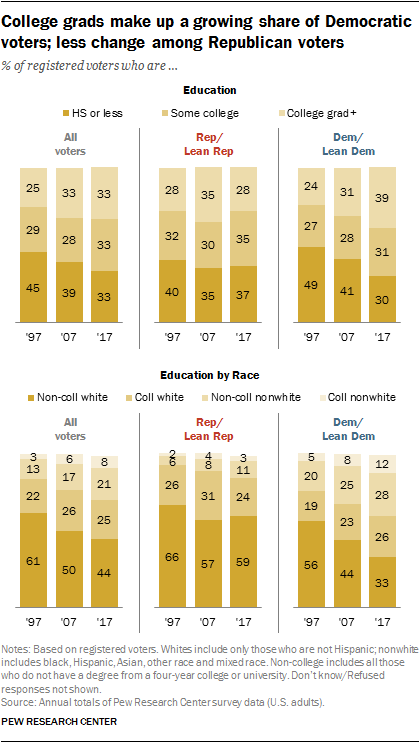