African American Turnout and the Midterm

The confidential memo from a former pollster for President Obama contained a blunt warning for Democrats. Written this month with an eye toward Election Day, it predicted “crushing Democratic losses across the country” if the party did not do more to get black voters to the polls.

“African-American surge voters came out in force in 2008 and 2012, but they are not well positioned to do so again in 2014,” Cornell Belcher, the pollster, wrote in the memo, dated Oct. 1. “In fact, over half aren’t even sure when the midterm elections are taking place.”

Mr. Belcher’s assessment points to an urgent imperative for Democrats: To keep Republicans from taking control of the Senate, as many are predicting, they need black voters in at least four key states. Yet the one politician guaranteed to generate enthusiasm among African Americans is the same man many Democratic candidates want to avoid: Mr. Obama.

“Anybody who looks at the data realizes that if the black vote, and the brown vote, doesn’t turn out, we can’t win. It’s just that simple,” said Representative Marcia L. Fudge of Ohio, the chairwoman of the Congressional Black Caucus, referring to African-American and Latino voters. “If we don’t turn out, we cannot hold the Senate.

In August, Dante Chinni wrote at The Wall Street Journal:


African American voter turnout tends to decline in midterms elections, usually at the expense of Democratic candidates who routinely garner more than 80% of their vote. In the last few presidential elections the percentage of blacks that vote has been very close to that of whites, according to the Census Current Population Survey. It even surpassed the white vote in 2012, according to that data.

In midterms, the percentage of people who declines across all races, but the drops are deeper among African Americans. 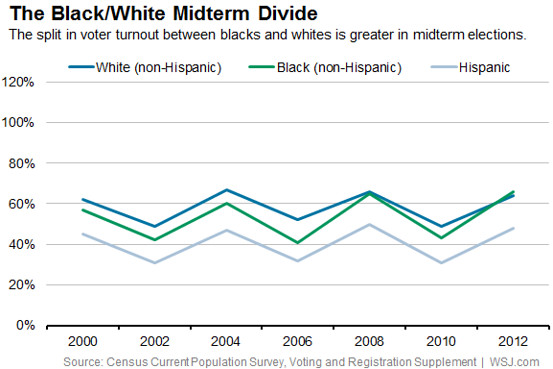