In Defying the Odds, we discuss state and congressional elections as well as the presidential race. The update -- recently published -- looks at political and demographic trends through the 2018 midterm.

In 2000, the GOP had unified control of Virginia government.  As of the 2019 elections, the Democrats do.


Once the heart of the confederacy, Virginia is now the land of Indian grocery stores, Korean churches and Diwali festivals. The state population has boomed — up by 38 percent since 1990, with the biggest growth in densely settled suburban areas like South Riding. One in 10 people eligible to vote in the state were born outside the United States, up from one in 28 in 1990. It is also significantly less white. In 1990, the census tracts that make up Mr. Katkuri’s Senate district were home to about 35,000 people — 91 percent of them white. Today, its population of 225,000 is just 64 percent white.
...
It’s not just Virginia. From Atlanta to Houston, this pattern is repeating itself — a new kind of suburbanization that is sweeping through politics. The densely populated inner ring suburbs are turning blue, while the mostly white exurban outer ring is redder than ever. Elections are won and lost along that suburban line, and in some places — like Atlanta, Denver, and Riverside County, Calif. — Democrats have begun to breach Republicans’ firewalls.

Around the advent of the modern immigration system, in 1965, foreign-born people made up only about five percent of the American population. Now they are nearly 14 percent, almost as high as the last peak in the early 20th century. The concentrations used to be in larger gateway cities, but immigrants have spread out considerably since then.

Some went South. In 1980, 56 percent of adults eligible to vote in Virginia were born in the state. Today, that’s down to 45 percent.

Lakshmi Sridaran, who heads South Asian Americans Leading Together, said that about a third of South Asians in the United States now live in the South. The South Asian population in the South nearly tripled from 2000 to 2017, to 1.4 million.

Of the 10 metro areas that had the largest South Asian growth, five are in the South, said Ms. Sridaran, who was born in Atlanta, after her father took a teaching job at Morehouse School of Medicine in the early 1980s. 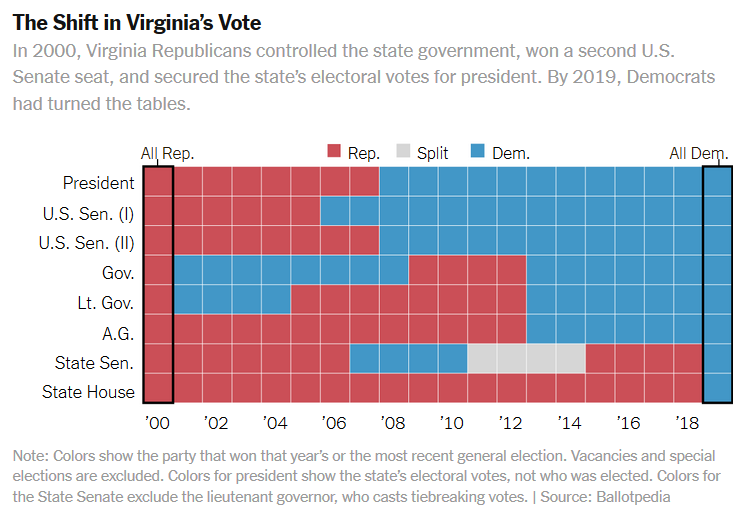